Which Brits Are the Bravest in the UK?


There have been lots of brave feats Brits have done over the centuries, from Ernest Shackleton heading into frozen Antarctica, to Ellen MacArthur sailing single-handed around the world. But what about your average Brit and their moments of bravery?

We’ve done some research into Britain’s current bravery credentials to find out how brave people think they are, from their biggest fears, to what adrenaline-inducing activities they would like to try. We’ve also discovered where in the UK the bravest (and the most scared) souls reside. Read on to find out...

How brave do you think you are?

This can be a difficult question as there are so many ways to be brave. People often think that bravery is having no fear, but bravery is something you can only have in the face of fear.

We’re not trying to get too philosophical here, but being scared of doing something and still going for it anyway is what bravery is all about. In our research, we asked people in the UK whether they considered themselves to be brave. Over half (53%) said they were ‘quite brave’, which we think is pretty respectable.

15% went beyond that to claim they were ‘very brave’, while 32% didn’t think they were brave at all. Like we said, it’s all about having the opportunity to overcome a fear, so even if you don’t think you’re brave, you could still surprise yourself given the chance to shine. 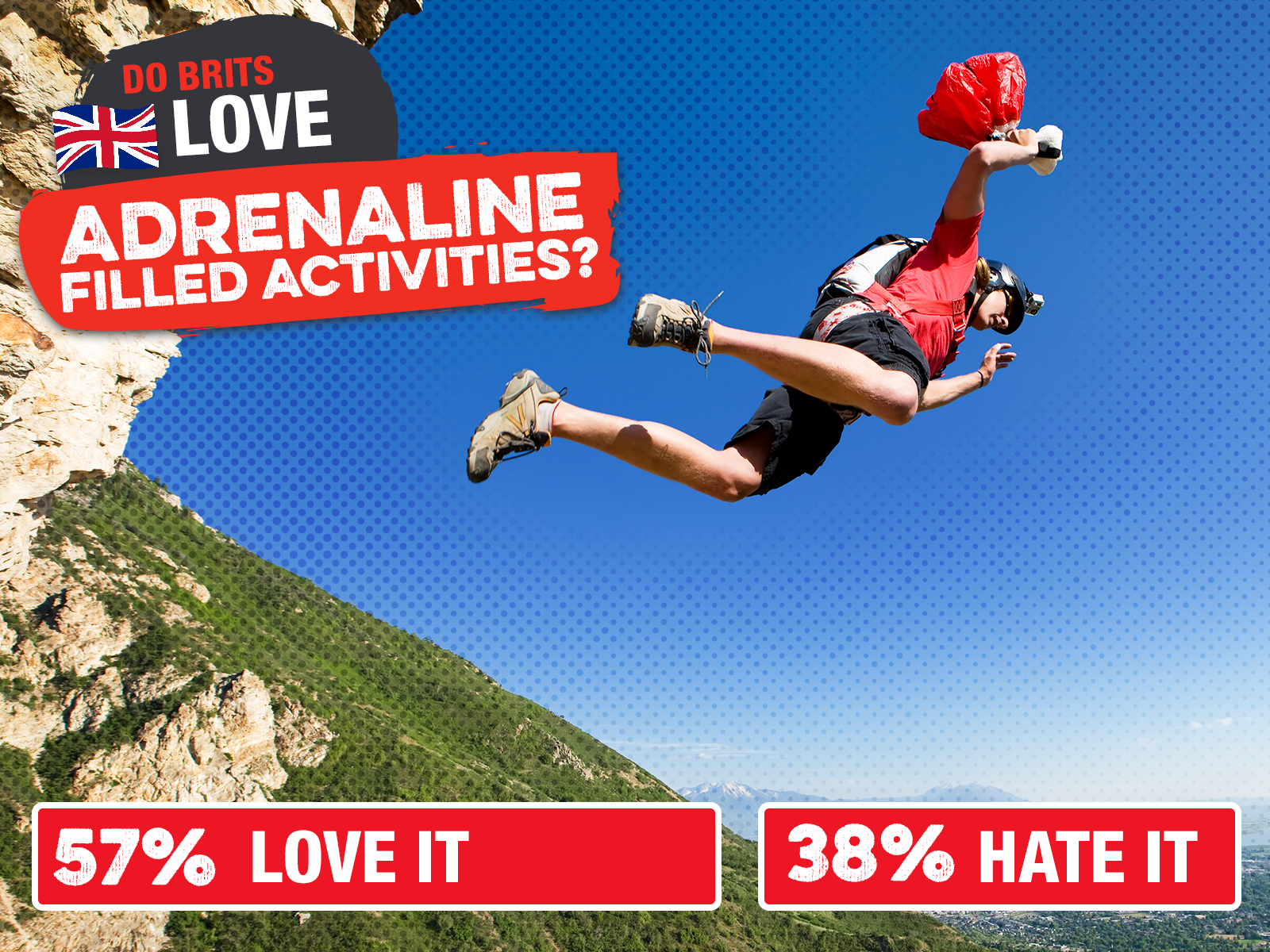 What are people afraid of?

Speaking of fear, we wanted to know what people were most afraid of in the UK. Our research gave us a list of the top five fears for people in the UK:

Heights comes out as one of the most common fears, which is interesting to us as we have so many fun ways to overcome that particular fear…

Animals feature heavily on this list, too, with spiders, snakes and sharks being the scariest critters. Sharks is an interesting one for the UK as any potentially dangerous species in our waters are so rare, but we get it, big fish with big teeth are scary. The UK’s only venomous snake is also very shy and retiring and you’d be very lucky indeed to even see one, let alone be in any sort of danger. Spiders are obviously pretty common and not remotely dangerous, but we understand some people think they are horrid!

During our research, we looked at where in the UK you can find the bravest people, as claimed by their inhabitants. And we’re taking their word for it. Our results gave us the top five bravest cities in the UK as follows: 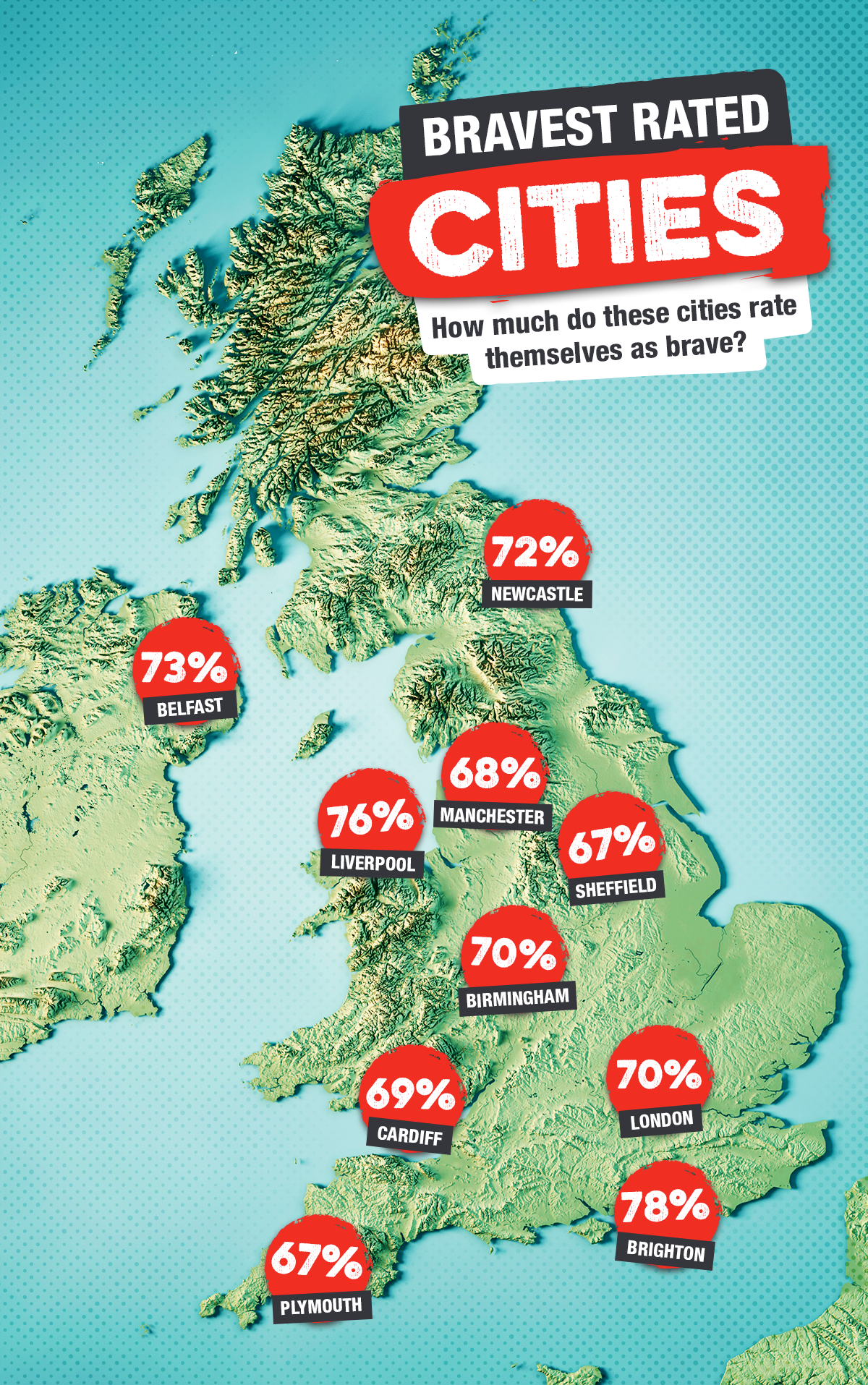 So, Brighton is the real home of the brave and the bold, followed not far behind by Liverpool. There could be something to be said for cities on or near the coast, with lots of opportunities for thrilling water sports and high-adrenaline fun helping to fuel local bravery levels.

Liverpool also has the great advantage of being close to North Wales, giving its residents easy access to all the thrills and delights of the mountains and coastline, including our many adventures at Zip World. We reckon this could account for the extra bravery levels found in Liverpool, with lots of opportunity for fear-facing, adrenaline-inducing thrills right on their doorstep.

The rush of adrenaline and the nation’s favourite thrills

Whatever the varying bravery levels around the UK, it seems that most people love a good thrill. Our research told us that 57% of Brits enjoy adrenaline-filled activities, compared with the 38% who would really rather keep their feet on the ground. 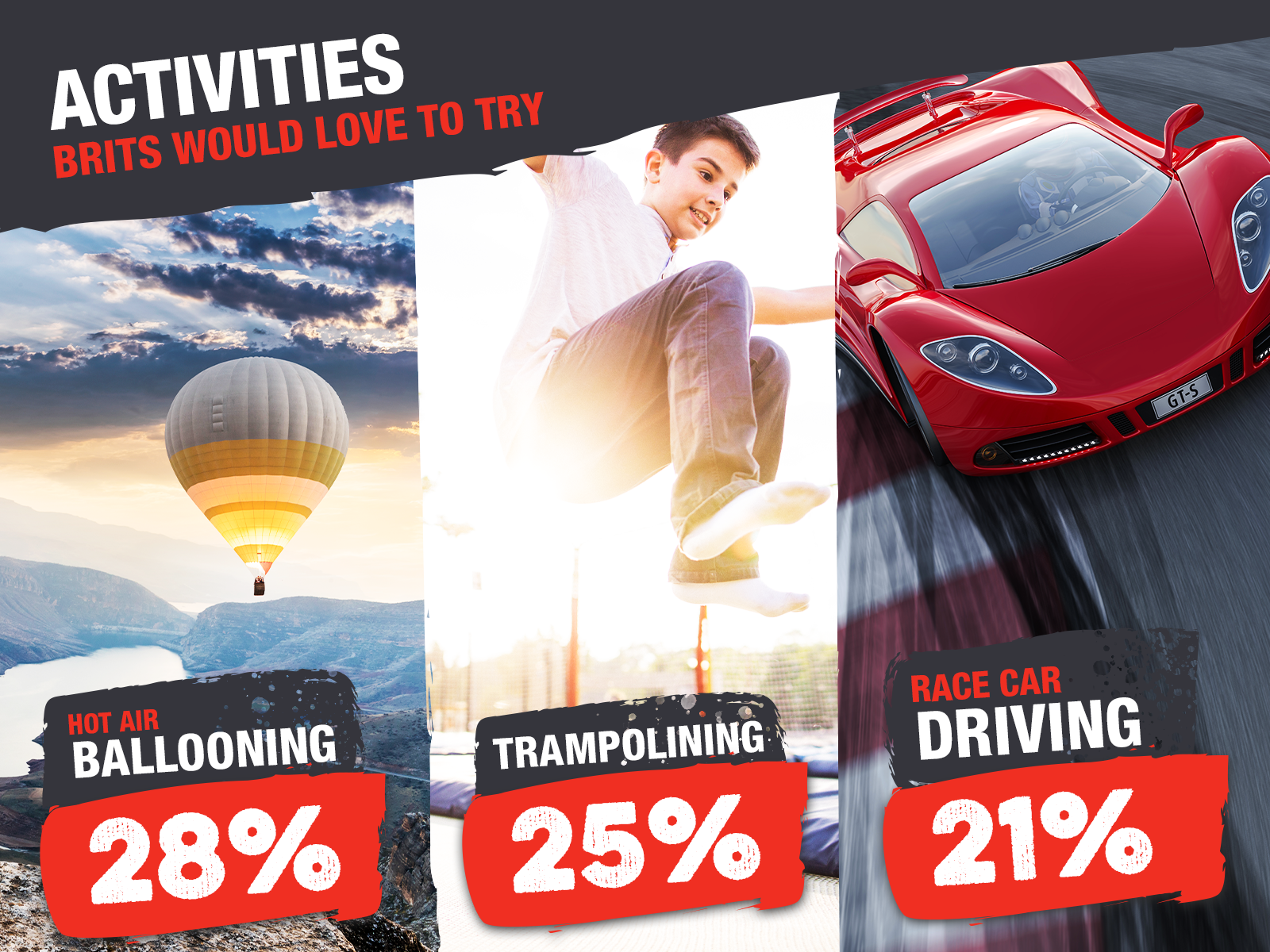 Most of us have had an ambition to do something thrilling at some point in our lives, whether that’s bungie jumping off a bridge or high-speed racing. We checked out what people’s top ambitions are when it comes to thrilling and adrenaline-fuelled activities:

This list of thrills includes loads of fun activities, several of which you can do at Zip World. If you fancy racing down a mountain in a go kart, zooming down the world’s fastest zip line, or trampolining in a cave, we’ve got you covered. 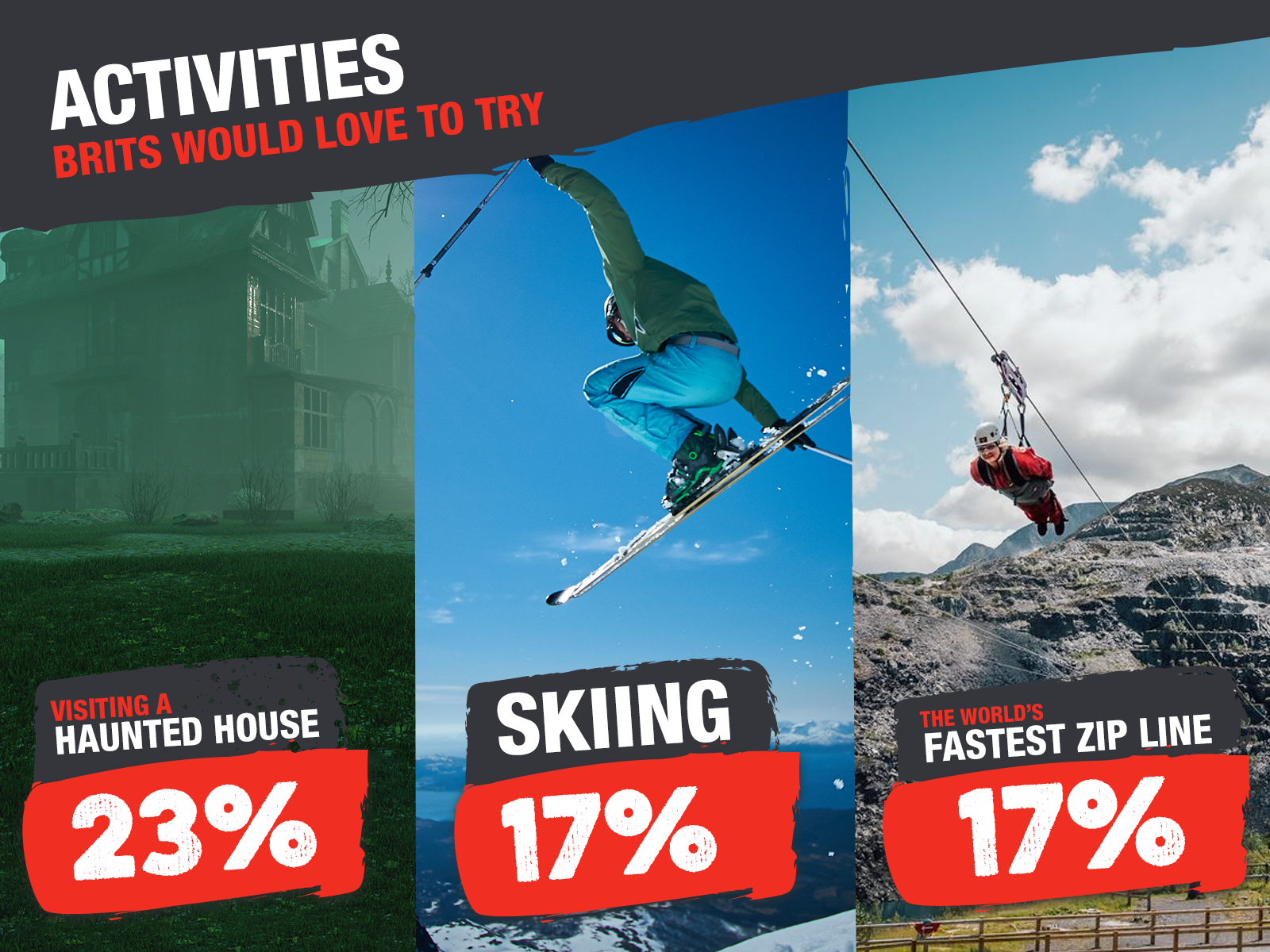 Be brave and do something incredible at Zip World

If you’re feeling inspired to do something thrilling or face some fears, we’re very happy to help. We’ve got locations in Snowdonia in North Wales, as well as at Aberdare in South Wales, with zip lines, treetop trails, roller coasters, cave trampolining and more. And if you’re feeling a little scared, we’ll be there to help you conquer that fear.

If you want to choose your adventure based on the bravery levels needed, each of our activities have adventure ratings which rank from accessible for everyone, to more challenging activities which will prove yourself amongst the bravest Brits. The three-tier adventure rating starts at one - being family-friendly activities such as Fforest Coaster, to challenging yourself further with tier two - where you’ll need your wits on adventures such as Zip Safari 2, to the highest of tier three - for the fearless to prove themselves on the likes of Velocity 2. These ratings can help you decide what adventure to go for depending on how much of a risk you’re willing to take, preparing those who are on the side of caution, as well as thrilling the self-proclaimed adrenaline seekers with fearful activities. 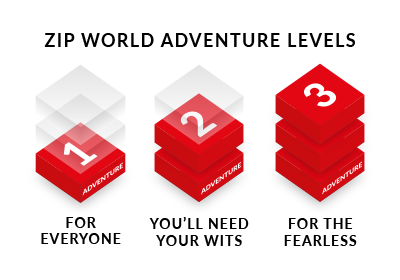 We’ve measured what adventure rating each city usually goes for when they visit us to determine who the bravest Zip World visitors are, with the lead currently standing with Doncaster at a 2.15 average rating, closely followed by Blackburn at 2.10, and Nottingham at 2.10.
Have a look at what you’d be willing to try and see if you can add a little more bravery to your city and the UK!